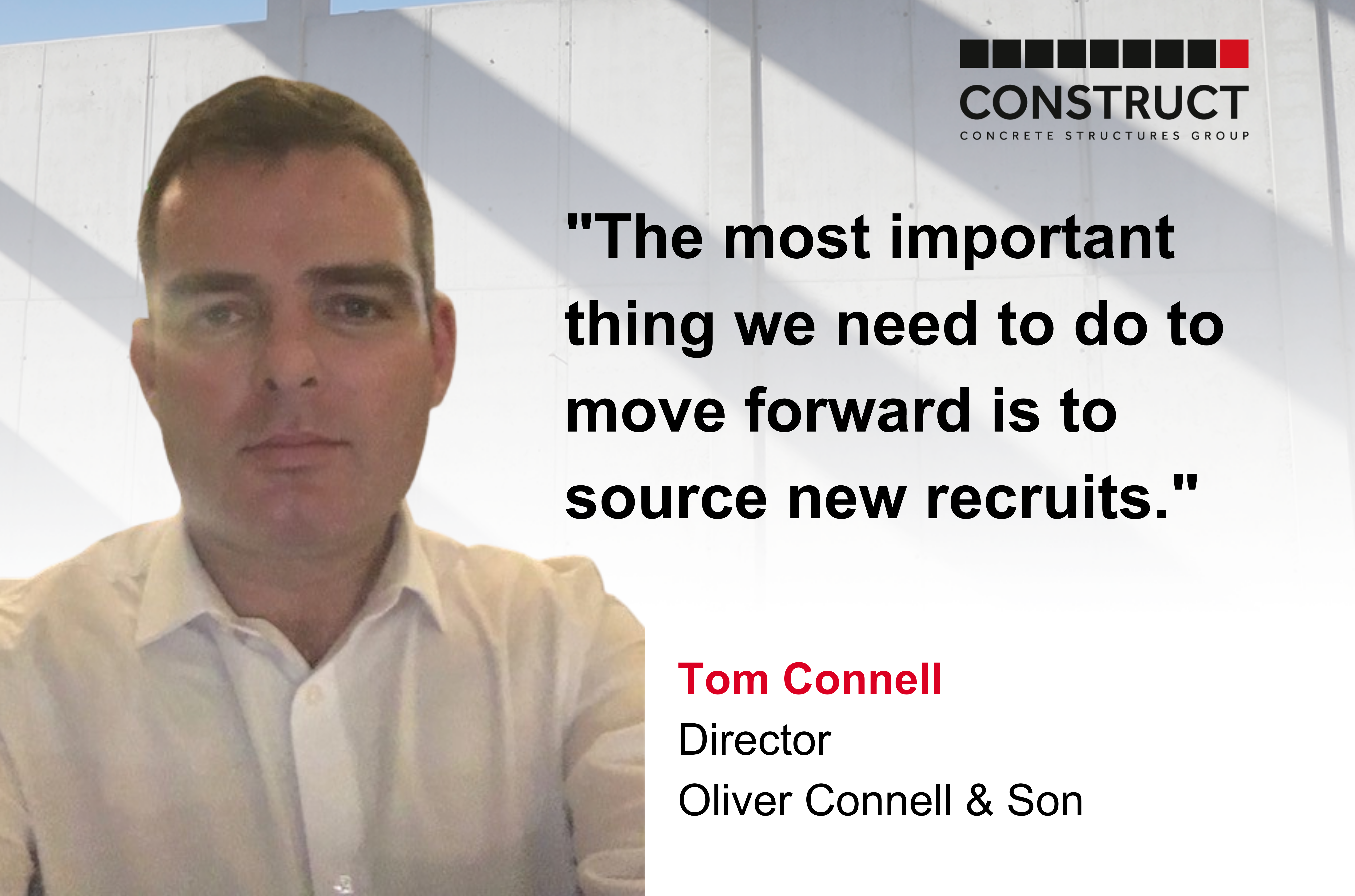 Intro: Tom Connell is a Director of Oliver Connell & Son Ltd, a construction company specialising in RC frames, groundwork, rail and aviation. He has also recently joined the CONSTRUCT Council. Here, he talks to us about the family-run company, issues facing the industry and the future of the construction workforce.

The company has been in business for 47 years now. Originally, the business was set up by my uncle Oliver, who moved over from Ireland when he was young, worked for other subcontractors and then set up on his own as Oliver Connell & Son Ltd. My father joined the business, as a partner, five years later. Both he and my uncle had backgrounds as shuttering chippies.

My brother James, who is our MD, became involved approximately 25 years ago, and I became involved about 20 years ago. Both he and I worked on sites initially and then, in my mid-twenties, I went back to college part-time and did a degree in construction project management.

The business has changed a lot – we originally started out just doing concrete frames and then, over time, we started to incorporate groundworks as well. About 10 years ago we were turning over circa £20million, and in the last financial year we turned over £100million plus, with an even bigger turnover projected for this financial year.

We’re predominantly based in the South East, normally running about 35-40 sites at any one time. Including subcontractors and agency staff, we’re paying about eleven-hundred people per week, and we’ve had to move offices and extend twice. When we moved into our current offices, four years ago, we never thought we’d fill them. However, we’re about to do a third extension!

We have rail and aviation divisions too, are currently working on HS2 and have worked airside at both Heathrow and Gatwick for almost 20 years.

What motivated you to join the CONSTRUCT Council?

It was actually something my brother suggested, but I joined because it’s good to have a collaboration with the people we’re often competing against. It provides an opportunity to bounce ideas off each other and talk about a variety of issues in the industry. We’re all big businesses and there are market leaders on the Council, but we all have a rapport and experience similar issues within the industry.

Whilst on the CONSTRUCT Council, is there anything you would like to achieve?

I’m not going to go in and reinvent the wheel, but I’d like to put as much into it as possible. We’re all busy people and time is limited for all of us. So, for me, I think it’s making sure I’m putting the work rate in and putting forward any ideas I have. It’s about collaboration between all of us – we’re all working in the same industry and seven heads are always better than one! As I said earlier, some of the people involved are industry leaders, so I’m delighted to be a member of the Council.

Has your company been affected by the labour and material shortage crisis? Is there any action you’re taking?

Labour is always an issue, especially during the summer months, because so much of the workforce is made up of Eastern Europeans and they travel home for the summer, which causes issues for our sites and our resources every year. This year was worse because many of them had not been home for two years due to the pandemic.

The cost of labour has gone through the roof, too. For any trade you’re probably looking at a rate increase of 15-20 per cent, and the issue with that is we’re tied into jobs which we priced for a long time ago and the rates are fixed.

Material issues are similar, the prices have gone crazy – the price of concrete is rising by about £15 per cubic metre by the end of the year, which is around a 15-20 per cent price hike. The impact is huge because, again, we are tied into fixed rates for jobs. We’ve got jobs where we thought we had this covered and had taken into account the rise in labour and material costs for products like rebar, but then we find out concrete is going up in price too.

The lead times for materials have increased significantly too. With rebar, in particular, there’s now a cooling-off period of around four weeks, whereas before it was only one or two weeks. It just makes things a little more complicated on sites, especially bigger sites where you have to order everything so far in advance, and then a lot of times you get your delivery date pushed back, which then has an impact on progress on site as well. The price of rebar has nearly doubled, and we buy about 40,000 tonnes a year – that’s a lot of money!

What is your outlook for the concrete structures industry for the next 3 years?

I think the most important thing we need to do to move forward is to source new recruits. One thing I’ve noticed is, similarly to the Irish cycle of a few years ago, the younger Eastern European people coming into the construction industry now are well educated. When they first started coming over to work in this industry, their education system probably wasn’t great in their home countries, so they were coming over from farms and villages straight onto sites, boots on the ground. But now, there are very few younger Eastern Europeans coming over, and the ones who do come are educated, or get themselves educated here. We’ve got quite a few younger Romanian workers now who are engineers, contract managers, programmers and site managers.

However, I don’t see where the next generation of construction workers is going to come from. There just doesn’t seem to be the interest in our sector. It’s surprising because the money is really good – it is one of the things I brought up at a BITA and CONSTRUCT dinner – are young people aware that they can earn a lot of money in construction?

This is one of the issues I’ll be bringing to the CONSTRUCT Council – should we be going into schools and universities and making young people aware that they can earn good money in construction?

There are new apprenticeship schemes now which we’re pushing hard on. We’ve taken on quite a few apprentices, and I know other businesses and other members of the Council are doing likewise, or setting up training academies. We need to do something to encourage a homegrown workforce because, looking forward, I can’t see there being a huge wave of workers coming over from abroad, especially with Brexit.

The other thing I think will change going forward is the systems we use because of the labour crisis. We’ve started using a lot of pre-cast concrete because it eases the burden of labour on sites and it is quicker, and I know other companies are doing the same. I think systems like that will impact the industry going forward.