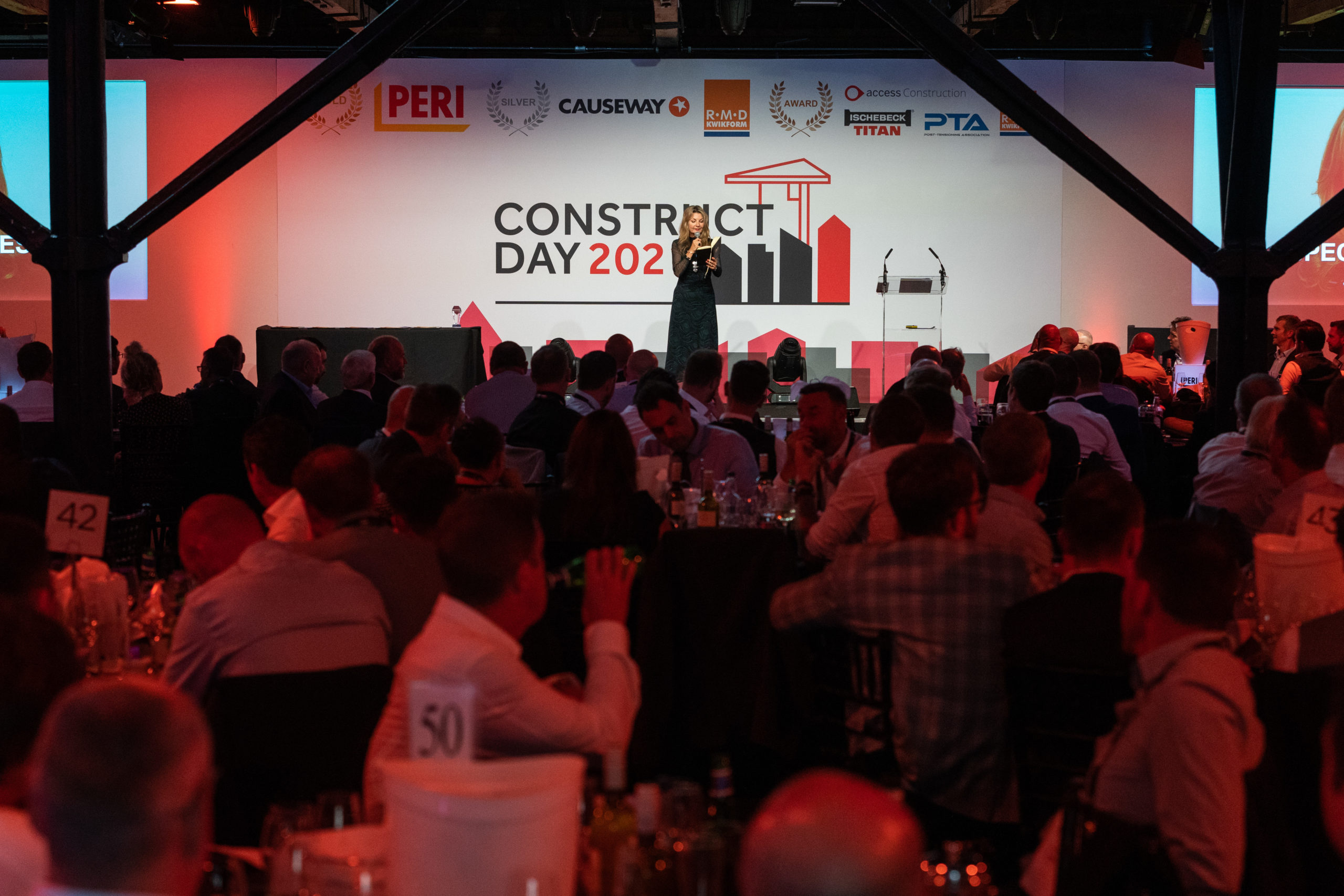 This year, CONSTRUCT Day reinvented itself by breaking away from the familiar mould of the Brewery and moving to the Grade I listed warehouse, Tobacco Dock. The event took place on Friday 1 October, reuniting and introducing over 550 guests from the concrete structures industry.

After a successful exhibition, networking and sparkling drinks reception in the CONSTRUCT Vaults, the Awards ceremony commenced, hosted by the hilarious, Jo Caulfield. Five winners were recognised for their outstanding achievements in the sector, from innovative new products and systems, to the hardworking, committed workforce that support the construction industry. The award categories saw some changes this year; the projects over and under were merged into one category, and CONSTRUCT partnered up with the Post-Tensioning Association (PTA) to host the PTA Best Project Award. Therefore, the categories consisted of; Projects, Health & Safety, Unsung Hero, Young Achiever and PTA Best Project Award.

Realtime Civil Engineering took home the Projects Award for their project, 100 Liverpool Street. This project was a redevelopment of an existing 8 storey building, retaining one third of the original structure, re-building to a new 12 storey building with Commercial Units to Ground Floor, Level 1 and 2, with office space from Level 3 to 11 and a plant space on Level 12. The judges liked this project because of its scale and complexity.

John F Hunt won the Health & Safety Award with their innovative new Competency Cloud System. This is a QR code-based system that is displayed on an operative’s hard hat and issued at induction when scanned with a mobile device to display competencies such as CSCS, CPCS, IPAF, etc. The judges said that they could see this one day being a universal system used across the whole industry.

Phoenix Specialist Contracting (PSC) was awarded the PTA Best Project Award for the Marshall Building. A new building for the London School of Economics Estate, it consists of a double basement formed in reinforced concrete and a 10-storey post-tensioned superstructure above. The concrete is entirely exposed throughout, with large Post Tensioned Transfer Beams at Level 1 and 3. The judges thought this was an excellently engineered project.

CONSTRUCT would like to thank everyone who donated to its official charity, the Lighthouse Club, including those who participated in the live auction, which all in all raised a fantastic £9,807 for the charity. The money raised will go to helping relieve poverty suffered as a result of an accident, disability or ill health by people employed or formerly employed within the building and civil engineering industries.

“During my tenure as Chairman, I wanted to hold a CONSTRUCT Day that broke away from its familiar mould, and hold a much bigger, more exciting event for our members and the industry. This year, this goal felt more important than ever, as we took for granted the importance of meeting and networking in person. I am thrilled with the success of CONSTRUCT Day this year, and I was so pleased to see the industry reunite at last. Congratulations to our award winners and highly commended, and thank you to all guests, exhibitors, and our sponsors who made the brilliant event possible.”