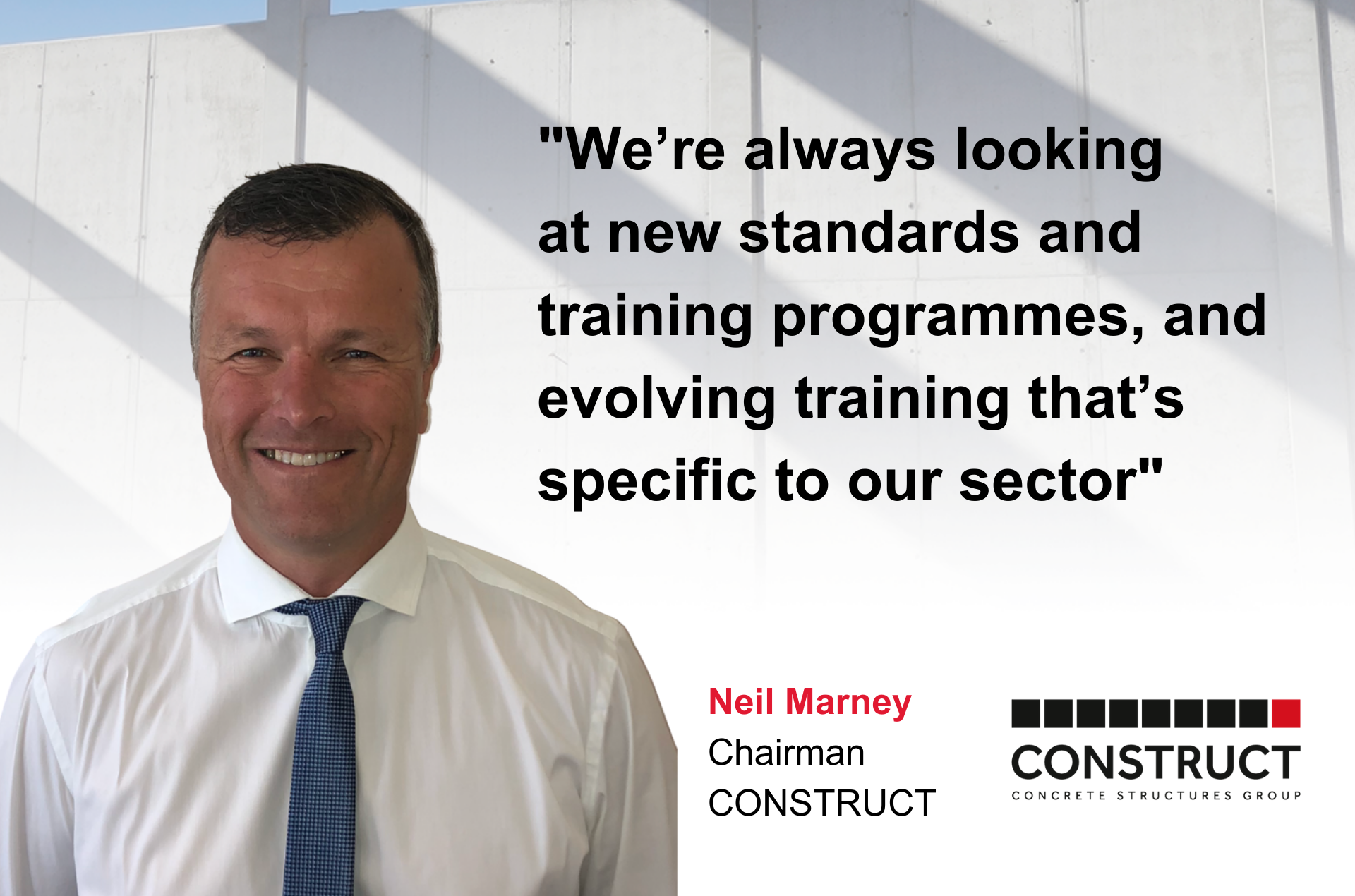 Intro: CONSTRUCT chairman, Neil Marney, reflects on the events of last year – along with the challenges and opportunities facing members in 2021.

To say that the last 10 months have been disruptive for the construction industry would be a serious understatement. Faced with an extraordinary global public health crisis, businesses in the industry have had to tap into their reserves of resilience and creativity like never before.

For CONSTRUCT chairman Neil Marney, the experience of his own company, Marney Construction, has reflected that of many CONSTRUCT members across the country.

Construction projects being shelved due to Covid-19 have had a major impact on livelihoods, particularly in London. But Neil has also found that labour costs have been dramatically affected by the government’s attempts to support self-employed workers.

“I would say that the key impact on the industry has been the fact that the Self-Employed Income Support Scheme has caused a massive issue with labour,” he said. “Workers have taken the grant, then either not come back to work or started charging far too much money. So, it’s caused a huge labour shortage in respect of the work that is out there now. At CONSTRUCT, we’ve taken the issue to Build UK and the Construction leadership Council, with the hope that the government will listen.”

For CONSTRUCT, shining a light on issues such as this and advocating for members’ interests will be a key pillar of the organisation’s approach to the second year of the pandemic. Building on an enhanced influence with government, Build UK, the supply chain and other stakeholders, CONSTRUCT will continue to provide an essential voice for the sector.

In 2020, the organisation’s role pivoted to become an invaluable support channel for businesses in the sector, as they dealt with the double challenge of Covid-19 and Brexit. Aware of the need for a clear understanding of guidelines and legislation, this support will continue in 2021 with regular Covid-19 updates, via the improved website and social media presence.

Looking to the year ahead, one of the core areas that CONSTRUCT aims to address is industry training. Neil feels that this should be a top priority for the sector and that the current labour shortage presents an opportunity for the industry as a whole. As the number of foreign workers in the UK falls, offering new career prospects to people who have worked in industries such as aviation would, Neil believes, help to avert a recruitment crisis.

“People from aviation are used to being trained and they’re used to legislation,” he said. “So, why are we not retraining these people in schools and colleges? Why are they not working on our sites? Now is our opportunity to get some homegrown people trained and try to reinvigorate our industry. There’s plenty of talent in the UK, with people being made redundant or placed on furlough, and the Talent Retention Scheme is a good first step to keeping talent with the sector, and transferring other skilled workers from more highly disputed sectors. We’ve got to invest in new people who can give us a return.”

This year CONSTRUCT will launch as an Approved Training Organisation (ATO), enabling the delivery of innovative new programmes and standards – such as the Temporary Works Concrete Specialist Course. The addition of representatives from the CFTF to CONSTRUCT’S council has also supported the organisation’s mission to provide industry-leading training.

“We’re always looking at new standards and training programmes, and evolving training that’s specific to our sector,” Neil said. “It now feels like we’re getting more of a conversation going and we’re seeing a lot more productivity by having the people from CFTF on the council.”

Helping members to get a better return on their CITB levy is also a key objective for CONSTRUCT this year.

“We’re very keen to educate people on how to get the best out of the CITB levy,” Neil said.  “CONSTRUCT becoming an ATO is part of that, by being recognised by the CITB, getting the grants and sharing that training and information with our members. It’s about giving members access to training that they may not have had before and trying to get their CITB levy back to them in training. We know it can be done, but we need to help members pull it together.”

Promoting STEM careers is part of CONSTRUCT’s push to boost training and recruitment, along with a continuing focus on health and safety improvement. Extra support is planned this year in the form of a groundworks sub-committee, to look at specific issues affecting members in that area.

Neil is cautiously optimistic that the autumn will see the return of the CONSTRUCT Day and Awards, due to be hosted at a new venue – Tobacco Dock in East London – on 1 October. The plan is to make the event bigger and better than ever.

“CONSTRUCT Day is a great networking opportunity and social gathering for our members,” Neil said. “It’s also a place to showcase what we’ve done through the year and get feedback from members.”

Membership of CONSTRUCT continued to grow last year with eight new members, including two contractor members. Attracting new members in 2021 will only strengthen CONSTRUCT’S capacity to provide a clear voice for the concrete structures sector, as the world hopes to approach the light at the end of the coronavirus tunnel.

“We’re still a long way from understanding the full effect of this pandemic,” Neil said. “We understand that it’s going to be very tough for everyone this year, so that’s why we’re offering discounts to members, more ways to pay and more help all the time. But my message to the sector is that we’re stronger together.”

CONSTRUCT is currently offering a 15% discount on membership fees for members who pay their subscription by the end of January.