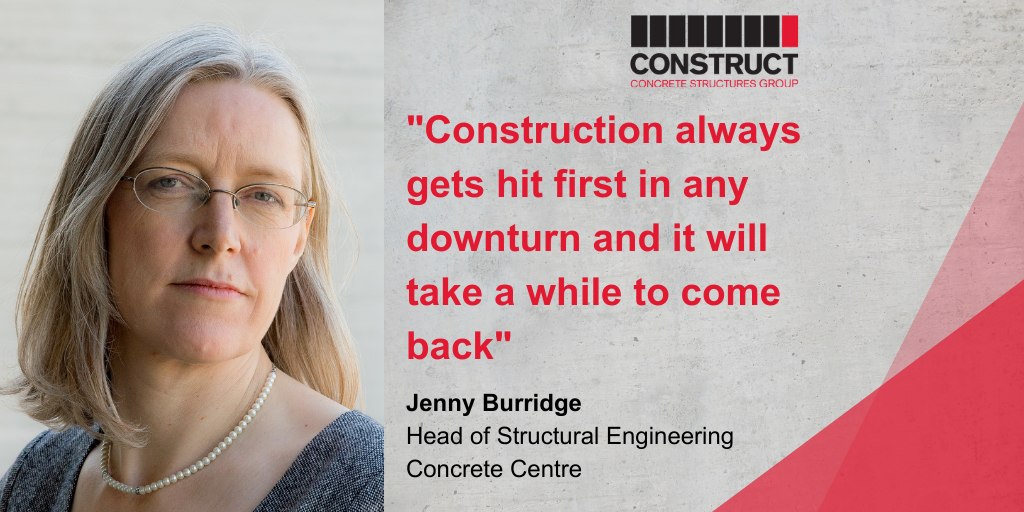 Member Profile – MPA The Concrete Centre Intro: This month we meet Jenny Burridge, Head of Structural Engineering at The Concrete Centre, part of the Mineral Products Association (MPA). Jenny shares her view of how the COVID-19 pandemic is affecting the wider concrete industry supply chain. What has been the biggest impact of the coronavirus pandemic on the construction industry, in your view?

Companies have had to try and work out how they will deal with having workers onsite whilst keeping them two metres apart. It’s been really difficult to do that. During the time that I’ve been working in the industry, it has become a lot safer, which is brilliant. I’m very impressed by the way that many companies, including CONSTRUCT members, have spent a lot of time and effort – and continue to do so – to make sure that everyone’s health and safety is looked after. With this pandemic, we’re looking at people’s health, as much as their safety. But they’ve had to work out how to allow everyone onsite to eat safely, to use the toilet safely and so on, which has been really difficult for them.

Has the government’s approach to the pandemic been a help or a hindrance to the industry?

When the country was put into lockdown on 23rd March, nobody said that construction had to stop. So, there were still construction sites open, but it was seen that some workers weren’t social distancing and some local communities were not aware that construction was still allowed as a job that you obviously can’t do from home, so many sites were shut down. Then the sites opened up again, on a smaller scale.

This has been a hindrance from some CONSTRUCT members’ point of view, because they tend to be subcontractors and not running the site. I heard one member saying that they were being persuaded to go to a site where they had concerns about health and safety. However, the subcontractor was cautious about the main contractor making a claim against the subcontractor for delaying the project, for example.

Now that the lockdown is starting to ease, there is more ambiguity, so in some ways it has become more difficult. On the concrete supply side, 80% to 90% of companies shut down at the start of lockdown. MPA issued guidance to support concrete manufacturers through the early stages of the Covid-19 pandemic and has provided health and safety guidance for managers and handbooks for employees.

What does the road to recovery look like for the sector?

The furlough scheme has been brilliant for both our members and CONSTRUCT members, but it’s going to come to an end in October. I think there will be a lot of job losses because companies won’t actually be able to employ that many people on their sites. Construction always gets hit first in any downturn and it will take a while to come back. We might have a v-shaped recession, but I think there will be a longer period before people start having the confidence to start some construction projects again.

What will the pandemic’s legacy be for the construction industry?

We will have learned a lot as a country and I think that many of the good habits we’ve picked up during this time will remain. Working from home has seen a huge increase and that could make a difference to our industry. Why build big offices when two-thirds of the people in those offices could work from home? I can see that a change in the way we work could change the buildings that we need and how we use our cities.

On the design side, it feels as though the pause has given an opportunity for designers to look at the sustainability of buildings, in particular the embodied carbon in our built environment. At the Concrete Centre, we have spent much of our time helping designers specify concretes with lower embodied carbon to achieve buildings that are both better for the environment now and resilient and long-lasting.