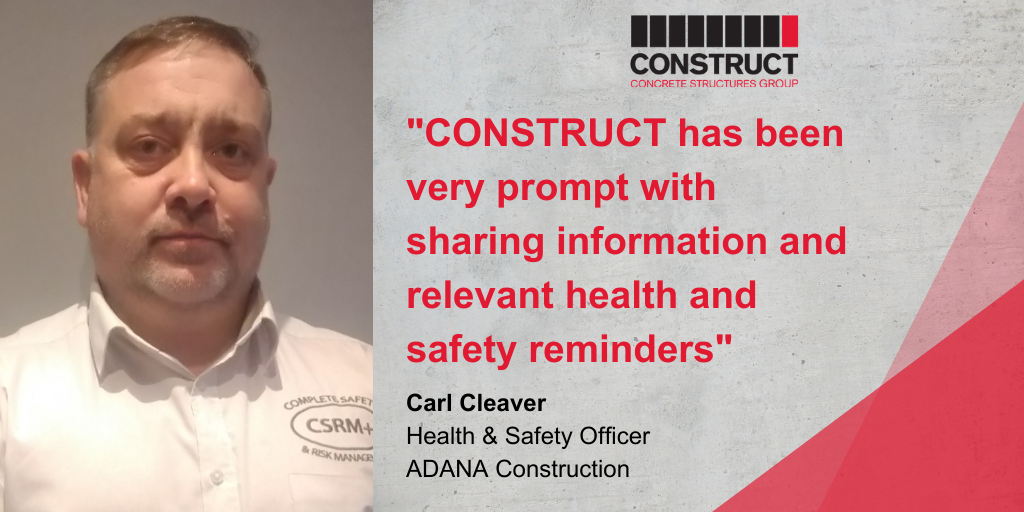 Member Profile – ADANA Construction Intro: Carl Cleaver is an independent health and safety consultant who supports companies and contractors across many different sectors, through his company CSRM+ (Complete Safety and Risk Management). He has been health and safety officer for CONSTRUCT member ADANA Construction for over five years. What have been the biggest H&S changes brought about by the Covid-19 pandemic?

The management and control of hygiene and social distancing have been the biggest elements we’ve had to implement. That has meant changes to general logistics onsite, in the welfare and changing areas, and in the work activity. We’ve had to factor in additional space between the operatives, which has been challenging and has had a knock-on effect on the actual documented operating procedures as well.

I don’t think that the latest national lockdown in England is likely to bring about many further changes, but it may have a greater effect on commuting. There is a lot of car sharing that happens in the industry, due to financial costs and also to businesses promoting a greener environment. But now, having multiple people within a vehicle has become a no-no, for sensible reasons.

With more people using their own vehicles, that could potentially quadruple the number of cars coming to site and workers may start to feel the drain in their pocket from having to fuel their own vehicles daily. Small factors like that could become bigger ones, particularly in terms of mental health.

Which changes have presented the most practical difficulty?

The actual onsite activities are relatively controllable, although size and space can have an impact. But the area where I’ve noticed difficulties is the welfare arrangements. There may not always be the space to add extra facilities, so that could potentially impact on personnel numbers onsite and may affect delivery or delay a project. Sites may need to bring in more resources to maintaining the cleaning standards, or workers might need to have greater staggered break times, which was never a factor originally.

For myself, in the civil engineering side of things, the issue is likely to be the wetter weather and the impact it may have on the clothes drying areas and changing facilities. I think that’s an area that we’ll need to focus on heavily to ensure we’re maintaining the required, mandated social distancing/hygiene standard.

Complacency may also become a challenge, too. We’re all a bit fed up with the unfortunate situation we’re in and sometimes people can take their foot off the gas a bit, by starting to encroach on others’ space a bit more. During the warmer months, people were happy to sit and eat outside where appropriate. But the winter is going to have an impact on every angle of the pandemic, with the wetter, darker, colder days affecting practical matters and people’s mood in general.

You mentioned mental health – how has the pandemic affected your approach to the issue?

Mental health is a massive topic and there’s been a lot of drive to reinforce awareness of that, such as mental health awareness courses for the supervisory staff. Unfortunately, it’s still the case in construction that people tend to be ‘rough, tough’ contractors, in a primarily male workforce. We are seeing more females coming in, which is a definite plus. But it’s clear that in the world of construction, many people do still want to keep things close to their chest. From ADANA’s perspective, they’ve made it much more of an open topic. It’s been made absolutely clear that at ADANA, there is an open door policy. People are being told, ‘Listen, never mind just talking about work – if you’ve got issues at home, let’s talk and share.’ This is always a heavily focused topic within ADANA safety committee meetings and with the safety representatives to ensure this message is relayed to operatives regularly.

As health and safety officer, I’m there to mandate and ‘police’ things, but I also take great pleasure and enjoyment in becoming one of the team. I’m not just there as a colleague, I’m a friend as well. In health and safety, that’s a massive thing for people to know, that you’re there to listen and help. It’s about making people feel reassured.

Have you noticed any unexpectedly positive outcomes from the new regulations?

Health and safety has become a very heightened topic and more recently I’ve found that if people have seen something that they’ve felt isn’t right, they’ve actually been much more forthcoming about raising the issue. For example, on one site recently there was tight access in an internal staircase and social distancing was difficult there. Someone who wouldn’t normally raise issues approached me and mentioned that people had been in tight proximity there, which allowed improvements to be made.

Looking to the future, what will be the biggest challenges facing the industry?

I think that social distancing and hygiene will continue to be the main challenges, whether onsite or during travel to site. In my own opinion, I’ve always thought that construction is a heightened area of risk. Back in the summer, Construction News reported that construction workers were among those with the highest Covid-19 death rates.

Another thing I’ve noticed is that there are lots of different standards regarding site access. Some sites use typical biometric entry with a thumb print, providing hand sanitiser for use before and after. But some have turnstiles operated by facial recognition with inbuilt temperature monitoring. The temperature is taken in a split second and if someone has a raised temperature, the turnstile is automatically stopped from operating and the manager is immediately notified. This also works as an early warning for people who may feel fine and not yet realise their temperature is high. I think it’s fantastic and if that could be standardised, it could become the norm onsite, rather than relying on someone filling out a health and safety form regarding their wellbeing etc.

What have been the benefits of CONSTRUCT membership during the pandemic?

I’ve been really impressed from the start. CONSTRUCT has been very prompt with sharing information, along with giving frequent and relevant health and safety reminders. The direct access to other members, if we need it, is very good. The regular open forum discussions are highly recognised within the concrete structures industry and in construction generally. It’s just a very positive organisation.